Finally have a working heads up display (HUD) – one of my requirements for releasing an actual playable version of the game. I really want to keep the screen as uncluttered as possible, but at the same time allow players to get the tactical information they need. In general, all monsters have 1 hp and the behaviors are unique, so there is a lot of information that should be conveyed just from playing a few times. 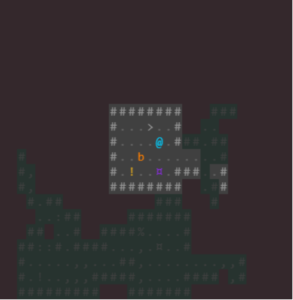 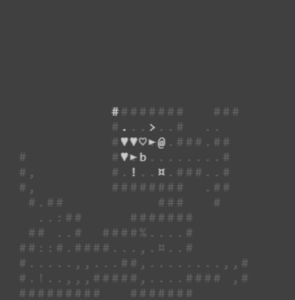 Other important things to know are status effects, and whatever items or unique terrain is near you. (e.g. is that radiation?) 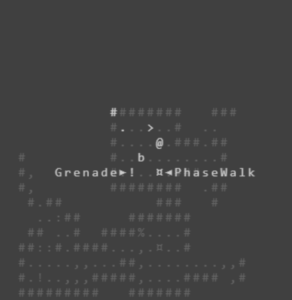 The code to get this working was actually really fun to write.

Other things tackled this week were ‘conveyed’ flags. Certain powers can now convey flags such as flight, or radiation resistance. In earlier versions I was doing this quite messily – lots of room for error when power systems were being installed or uninstalled. Now it flows quite naturally.

This is important because at some point I plan on adding ‘challenge rooms’ that require you to sacrifice one of your power slots for an otherwise useless power. For example, there is a really amazing item inside the next system of rooms, but the rooms are irradiated. Fortunately, there is a system near-by that conveys radiation resistance – but you’ll have to temporarily sacrifice something else in order to install it. What you choose to do away will may make the next couple rooms harder, depending on what’s inside of them.