Rook is a 7DRL entry by Joshua Day. The concept intrigued me, and the screenshots caught my eye. (Note to roguelike developers: screenshots!!) 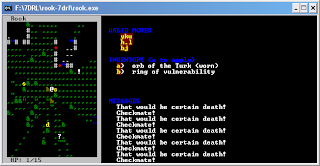 At first, I was at a loss of what I was supposed to be doing. The readme.txt was not very helpful in explaining some of the core mechanics of the game. However, the success post on 7drl.org was helpful:

As long as you’re wearing the orb of the Turk, you can’t die a stupid death — every move you can make has to kill you.  If you take it off, you’re playing a traditional roguelike.  The ring of vulnerability will save you from losing any hitpoints, because every hit you take will kill you, which is forbidden by the orb.

Well, that explains that!

After reading that I felt a little bit stupid. Surely the name “rook” should’ve inspired me with some vaguely chess-oriented thoughts. Once I got the mechanics down it was a very fun little roguelike.

The game gave me a mad pell-mell sort of feel, with bouts of extreme tactical decision making. This is a good combination! I also liked the terrain. The trees (&) were first seen as obstructions, but later, as friends. I can use trees to lose pursuers! That way I don’t have to risk taking off the ring to dispatch them. And always, always, always, trying to move right.

Being “checkmated” is a unique way to end the game. Is there some way I can reverse my steps and make different decisions? That would be pretty amazing.

There is one particularly mean bug in that potions and scrolls can fall on obstructed terrain. The author is up-front about it and mentions it in the readme. But it is still quite sad to run out of your way over to a healing potion (!) only to find your way blocked. It is like the game is taunting me. But, that’s not necessarily a bad thing. Who doesn’t enjoy a good taunting every now and then?

After a few dozen mad-dashes rightward (yes, it is worth it to go after potions and scrolls) I was finally able to kill the king. Huzzah!

I also noticed that the game seems to be using curses? This would make for a great terminal game. Perfect for breaks at work between other games.

Either way, excellent work. Looking forward to the next version.