Pitman Krumb. Odd name, but definitely worth a play. 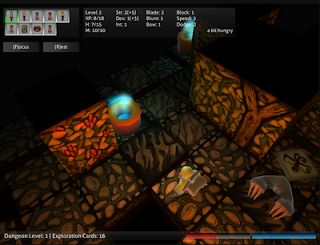 I’m a little familiar with the Unity browser plug-in, but have never seen it used to build a roguelike. I am impressed! Especially considering this is the team’s (Friedrich Hanisch & Jana Reinhardt) first entrance.
Having to move the camera manually is a little odd at first, but I did get used to it quickly. I like the look of the game a lot. The textures seem hand-drawn, rather than generic “rock” or “wall” panels. It’s cool to see 2D art represented in a 3D manner. I also liked the items — they lay on the ground like little cards. A slight annoyance — it’s hard to tell what you are looking at until you pick it up. If your inventory is full, this means you have to drop something, pick up the new item, check it out, and then either drop it and pick up your old item, or keep it. But even that is not too cumbersome a mechanic.
The game is surprisingly (for a 7DRL) filled with small touches of polish that make it fun to play. The way the terrain “popped up” when you entered a new area. The satisfying way in which your enemies fall over and then “float” into the sky, off the screen. Also the music was excellent, but I’m not sure how much was composed specifically for this game.
Things I didn’t like? I was confused by what an “exploration card” was at first, and why I was interested in how many I had left. But I figured that out. I was also unclear as to which potions were health and which were mana but maybe that was just me? Overall, most of the things I found annoying were things that I got used to rather quickly. Having every game use the exact same controls and mechanics would be rather boring, after all!
I had to cut my review short on this one because I just kept playing it, and there are at least 40 other 7DRLs to get to. After this game and Vicious Orcs, I think the rest of the competition will be very hard-pressed to measure up. But that is a good thing! It gives us all something to shoot for in 2012. 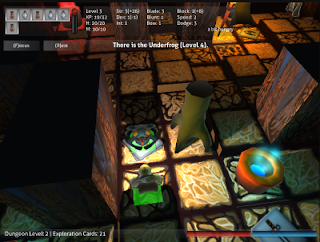 I’ll definitely be returning to this one after these reviews are complete. Well done, guys.
5 out of 5 @s.
You can find a list of all 7DR L2011 finishers on roguebasin or temple of the roguelike.